Why buying a diamond engagement ring still makes sense in 2019

In the late 1930’s, when diamond giant De Beers, was unearthing huge quantities of diamonds from their mines in South Africa, they hired a New York advertising agency and tasked them with making diamond engagement rings more mainstream. Up to this point, diamonds engagement rings had purely been the realm of royalty and the rich and famous. 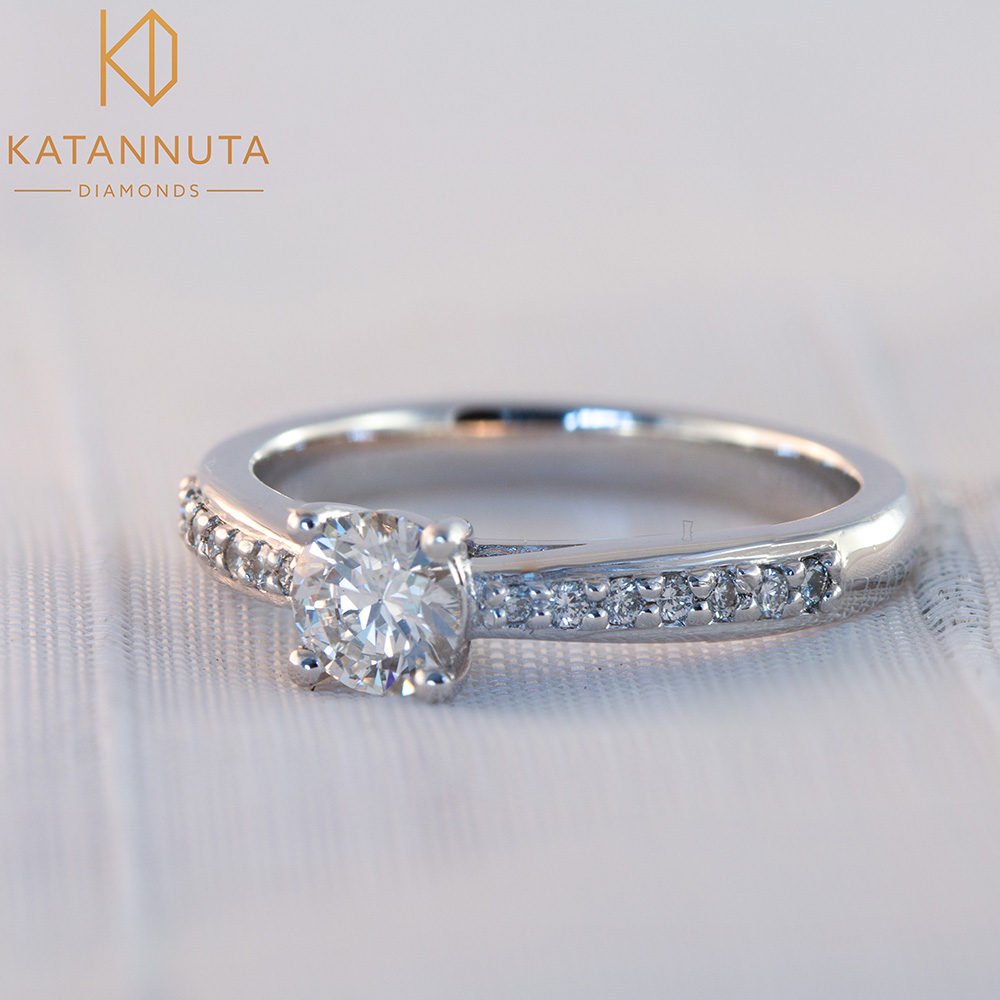 One of our recent diamond and platinum engagement rings.

By 1947, “A diamond is forever” had become De Beers’ official slogan and now, 72 years later, it’s estimated that 80% of engagement proposals involve a diamond ring. However, the advent of social media and shifts in consciousness have led to many couples embracing other gems for their engagement rings. We’ve made some gorgeous rings set with morganite, peacock sapphires, rubies and other coloured gemstones over the past 12 years.

Yet a diamond is still, practically speaking, the best gemstone for an engagement ring. Here’s why:

Diamonds are the hardest gemstone you can buy

All gemstones are rated on a hardness scale of 1-10 and diamonds are the hardest gemstone, rated at 10/10 on Moh’s mineral hardness scale. Not only are they harder than any other gemstones, they’re also harder than most materials you’ll encounter in day-to-day life. This means that diamonds are very resistant to wear and tear and are strong enough to stand continued use, day after day, for decades (after all, you should be wearing your engagement ring for the rest of your life, right?). This doesn’t mean that diamonds cannot be chipped or broken, but they are more practical than any other gemstones (especially tanzanite, which you should never put in an engagement ring).

Diamonds are graded according the 4C’s (i.e, you know exactly what you’re getting)

Diamonds are the only gemstone that have a standardized, universal grading system based on internationally recognised benchmarks. Known as the 4C’s of diamonds, this is what separates diamonds from coloured gemstones. With coloured gems, there is no standard grading or certification scheme, which is understandable given the massive range in colours, tones, hues and clarities associated with gems like rubies, sapphires and emeralds. When you’re purchasing a diamond of over 0.25ct in size, it should come with an independent laboratory grading certificate, typically from the GIA or EGL if you’re buying a diamond in South Africa.

One of our many GIA-certified natural loose diamonds, available at Katannuta Diamonds.

Diamonds are available in a huge range of options

In the traditional sense, an engagement ring is set with a diamond that’s as close to perfect as possible, with colourless, eye-clean diamonds being preferred. As we move towards the end of 2019 however, South Africans are embracing variations on traditional white diamonds. Whilst white diamonds can be expensive, depending on the size and quality of the diamond, cheaper alternatives do exist and are growing in popularity.

Cognac diamonds come in a range of rich brown shades, from pale champagne colours to much deeper browns, often with an undertone of orange. Typically mined in South Africa and Australia, these diamonds can also be called “chocolate diamonds” a term trade-marked by American jewellery company LeVian. The colours in these diamonds are all completely natural and setting these diamonds in rose gold brings a completely new style to engagement rings.

A round brilliant natural cognac diamond in a rose gold ring.

Salt and pepper diamonds are something we’ve mentioned a few times on our site. Available in a huge variety of shapes (including unusual cuts such as kites and hexagons) and colours, no two diamonds will ever be the same. Chock-full of visible imperfections and inclusions, and sometimes called “grey diamonds” or “galaxy diamonds”, these diamonds are exceptionally cost-effective when compared to white diamonds.

Diamonds are one of the oldest gemstones, with some diamonds from Cullinan Diamond Mine (near Pretoria) having been dated at 3.2 billion years old! That’s like wearing ¾ of the earth’s history in your engagement ring. They grew about 150km below the earth’s crust and were brought to the surface by volcanic eruprtions. Not only that, but diamonds are the purest gemstone, made of pure carbon. What better gemstone to signify the purest love you want to spend the rest of your life with?

When light goes from one medium to another, it bends, a phenomenon known as refraction. Diamonds have a very high refractive index and, combined with reflection and dispersion, give the sparkle that we value so highly. Light that enters a diamond is internally reflected, bouncing off the facets of the diamond before being refracted back out of the diamond.

Essentially, diamonds function like a kaleidoscope, and the 57 facets of a round brilliant cut diamond create a large variety of internal pathways along which light entering a diamond can travel. White light is a combination of all colours of the rainbow and by refracting white light (like a prism, or diamond does), these component colours can be separated out. This effect, known as chromatic dispersion, generates the little rainbows of colour – what we call “fire” in gemological terms.

The refraction of light from a loose diamond, showing all the colours of the rainbow.

Whilst there are plenty of white gemstones available (white topax, white sapphire, quartz), none of these minerals have the refractive index and dispersion capabilities of diamonds – which means that nothing sparkles quite like and excellent cut diamond!

For 12 years, Katannuta Diamonds has specialised in the manufacture of bespoke diamond engagement rings. With extensive supplies of loose, polished diamonds in all shapes, colours and sizes, we have something to suit you. If you’re looking for a unique ring at wholesale prices, drop us a line and let us help you create your dream ring.